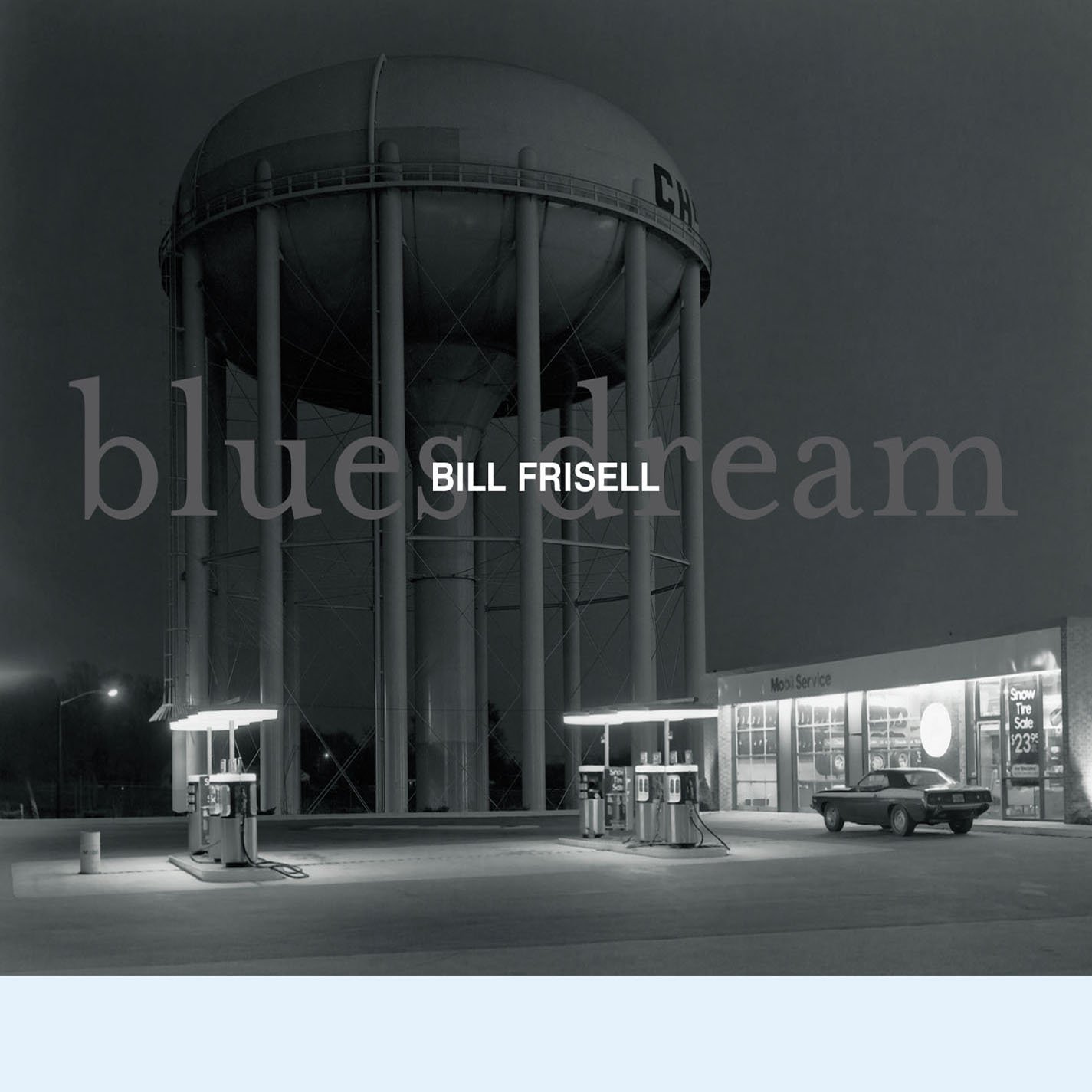 Sun is streaming in through the window on a fine spring morning, the Papers have just been delivered, fresh coffee is brewing and there’s a new Bill Frisell album on the CD player. It doesn’t get much better than this. Frisell is a wonderfully talented and skilled jazz guitarist, but his appeal goes deeper and wider than mere jazz brilliance. His tone infiltrates the environment and catches your ear; it’s a sound that can contain good humour, or melancholy, or nostalgia, yet still be utterly fresh and un-cliched, and it’s unquestionably an adult taste: complex, rich, full of layers. Even when he plays the simplest of tunes, such as “Pretty Flowers Were Made for Blooming or Where Do We Go?”, the touch and timbre adds a dimension of experience and authority that few musicians deliver with such consistency. Blues Dream is a suite of pieces for seven-piece band originally commissioned for the unerringly hip Walker Art Centre in Minneapolis. Most of the musicians have played with Frisell at different times in his career, but it’s the first time he’s used this particular line-up. The back line comprises double bassist David Piltch and Sex Mob drummer Kenny Wollesen (who accompanied Frisell in his recent UK appearance during the London Jazz Festival). At the front is steel guitarist Greg Leisz plus three horns: trumpeter Ron Miles, trombonist Curtis Fowlkes (who both played on Frisell’s innovative Quartet album) and saxophonist Billy Drewes. The reunion element give Blues Dream a slight feeling of a retrospective, though the material is all new, and all Frisell’s. There’s a hint of his witty and empathetic music for silent Buster Keaton comedies such as The High Sign and Go West, which used his trio with Kermit Driscoll and drummer Joey Baron to such good effect. Wollesen has something of Baron’s hyperactive attention to detail, but on numbers such as “Where Do We Go?” and “Outlaws” he and Piltch seem just as happy generating a groove so spacious you could drive a pick-up truck between its snare beats.

Frisell’s way of voicing the front line is as unconventional and logical as his guitar playing – so odd and off-kilter that you couldn’t imagine it any other way. Listen to the opening of Greg Leisz (Frisell, like Miles Davis and Carla Bley, has a habit of giving songs the names of real people, from Jimmy Carter to Ron Carter). The horns blend in a kind of Mingus-meets-Stax manner that means you can hear individual sounds quite clearly within a blurry ensemble.

Ron Miles, a distinctive trumpet player who has made a couple of strong albums under his own name, takes the lead in the two versions of the title track and the horns-only Fifty Years. Jazz Passenger Fowlkes shines in Soul Merchant and Drewes wails decoratively on “Pretty Flowers.” Leisz is a strong foil for Frisell, soaring like an eagle on “Pretty Stars Were Made to Shine” and diving back to country earth for “Slow Dance” and the big-boned “Where Do We Go?.”

Sometimes the ensemble achieves a kind of orchestral grandeur, reminiscent of the line-up that had such fun and games with Ives, Copland and Dylan on Frisell’s album Have a Little Faith. And at other times they settle down to play the blues, as on “Things Will Never Be the Same.” In case things get a little too normal, Frisell can always be relied upon to weird things up again by throwing in a few guitar loops – atonal, asynchronous and completely A-OK. John L Walters, The Guardian (London) April 13, 2001

Though he is commonly pigeonholed as a “jazz” guitarist because he is a superb improviser, Bill Frisell defies easy categorization. The incredibly prolific musician’s last few CDs have been ruminations on various traditional American styles – mostly country and folk. Blues Dream continues in that vein, but it is by far the most complex and fascinating of these explorations; in fact, I’m going to go out on a limb and suggest it is Frisell’s best album ever. Fronting a septet that includes master slide guitarist Greg Leisz, bassist David Piltch, drummer Kenny Wollesen, trumpeter Ron Miles, alto saxophonist Billy Drewes and trombonist Curtis Fowlkes, Frisell nimbly travels through a wide assortment of styles, from numbers that sound like they’re being played by the ghosts of turn-of-the-century New Orleans horn players, to deep country blues, to post-Bitches Brew abstractions. It’s all soaked in tradition, yet filtered through a modern sensibility. The combination of Frisell’s clean picking and Leisz’s always tasteful accompaniment on everything from pedal steel to Scheerhorn resonator guitar is absolutely beautiful, and the horn players are always integrated into the sound in such interesting and unpredictable ways. A rich, eclectic masterpiece.” – Blair Jackson, Mix Magazine (Cool Spins – The Mix Staff Members Pick Their Current Favorites)

“For those who have been wondering where Mr. Bill’s musical wanderings would lead him in the wake of his first solo CD, Ghost Town, Blues Dream provides the ambitious answer. Nearly all Frisell’s fascinations are here: the pastoralism of Have a Little Faith, a Nashville tinge, and the cinematic sounds of Quartet. There’s also the electronic loop atmospheres of his ECM and early Elektra years and the alternating Ellingtonian and Salvation Army horns of his quintet period. All of this melded into 18 new compositions commissioned by the Walker Arts Center.”

“A textural richness comes courtesy of Greg Leisz’s various guitars backing Frisell’s own guitar and a stunning integration of three horns: Curtis Fowlkes’s trombone, Ron Miles’s trumpet, and Billy Drewes’s saxophones. As you listen to this string of broad-shouldered pieces, tributes to greats like Ron Carter, and strangely blues-inflected soundscapes, it’s apparent that the solos of Ghost Town can operate as a sort of sketch or “cartoon” for this, the full painting; or a short that is then expanded into a feature. Frisell’s career is taking on the aspect of a well-crafted movie or novel that explores different story lines before bringing them together for the finale (and this might be the prelude to the finale).” – Michael Ross, Amazon.com