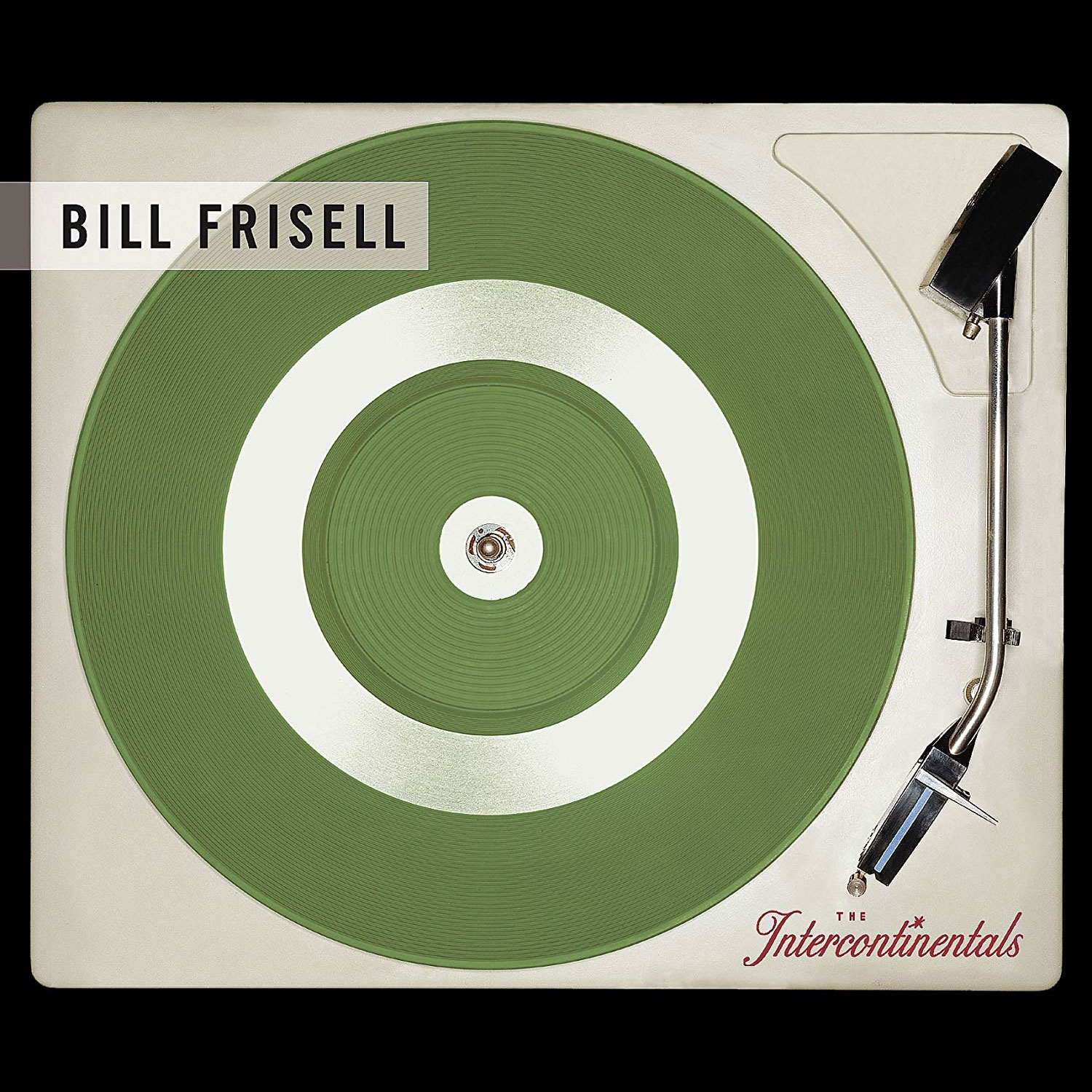 “A remarkable achievement – a hybrid that somehow both respects and transcends the styles involved….. with a sort of earthy, relaxed feeling – it’s country music from the global village.” – Washington Post

“Perhaps what’s called for is a new kind of world music, one that truly represents an openhearted meeting of the minds from radically disparate cultures…. The experiment has been ongoing in pop for decades, but rarely has it reached the level of synthesis achieved in a unique new recording by jazz guitarist Bill Frisell .
On The Intercontinentals, Frisell ranges more widely than ever before. The global cast weave potentially incongruent musical traditions and styles into a virtually seamless, silken tapestry. Through it all threads Frisell’s weeping and sighing guitar lines and judiciously manipulated electronic loops and effects. Without diluting the potency of the various elements — indeed, individual tracks take on dominant cultural identities ….. it insinuates itself into your consciousness with a wondrously light touch.” – S.F. Gate

“As diverse a lineup as any musical globalist could wish for, and it’s not surprising the group’s efforts are virtually indefinable, sometimes surfacing with a floating African feeling, sometimes recalling down-home American country music, at other times — especially in the vocal numbers with Cantuaria and Govetas — finding the compatible vibrations between Africa and the New World. But nothing is predictable, and the great beauty of this album is the consistent surprises it offers.” – Los Angeles Times

“This is a close, disciplined record, pregnant with thought and difficult things made to sound simple. Played quietly it ripples prettily. Crank it up and you hear all manner of extraordinary things going on in the torque generated by oud, fiddle, pedal-steel, electric and acoustic guitars. ‘Good Old People’ is about as beautiful as three rotated arpeggios can be when you subject them to a sequence of highly textured melodic variations. The press of oud on electric guitar in ‘Yála’ borders on the thrilling. Put it this way, Miles Davis will be tuning in. – The Independent UK

ALL MUSIC GUIDE
Bill Frisell has been actively — some would say obsessively — exploring the depths and dimensions of American roots music since the release of Nashville in 1997. His subsequent recordings — Ghost Town, Gone Just Like a Train, Blues Dream, Good Dog, Happy Man, and The Willies — were all approaches to the various folk styles that originated on American soil: country, blues, bluegrass, field hollers, jazz, and others. He has successfully been able to blend, extract, adapt, and otherwise morph one set of music onto another through his own approach to guitar playing — the song. More than any other contemporary guitarist, Frisell is driven by the notion of song — what it entails, both in terms of musical and cultural expression, and what it implies. On The Intercontinentals, Frisell continues his investigation of American music, but as a way of understanding how it entwines with the folk musics of other nations. Onboard for this outing are Frisell’s longtime collaborators Jenny Scheinman; pedal, dobro, and lap steel guitarist Greg Leisz; as well as Brazilian mega-guitarist and songwriter Vinicius Cantuaria; Greek-Macedonian vocalist and oud player Christos Govetas and Malian percussionist and vocalist Sidikki Camara. Frisell had played with Camara and Malian uber-guitarist Boubacar Traore a couple of years before and was intrigued enough to explore the connection further. The result of this unlikely union is one of the most seamlessly beautiful works Frisell has ever produced. On it, he and Cantuaria delve into the modern Malian guitar and percussion sound pioneered by Ali Farka Toure; blend it with the timeless emotional resonance of Greek folk songs via Govetas’ oud and infectious Brazilian lyricism; and filter it through shimmering country landscapes and otherworldly string textures that reinvent harmonic properties to suit the lyric of the blues, song, indigenous folk musics, and the contemporary improvisational ideal. Frisell composed the lion’s share of the tunes here, but there are also contributions by Gilberto Gil, Traore, Govetas, and Cantuaria. Scheinman’s violin acts as a gorgeous signpost for virtually all of these musicians to return to; her melodic sensibility and crisp tone are beacons in the often swirling, escalating, and/or cascading whorls of plucked strings, playing as many as four melodies simultaneously with winding, almost knotty scalar interchanges. What is most fascinating is that even in the vocal tunes, or those where the Malian blues effect is the prominent force, everything else in the mix fans out and creates often contrapuntal backdrops for elegant and lush, if dense, textures. Simply put, this is the busiest record Frisell has made in years, but it doesn’t feel like it. His sense of “song” is so pervasive, everything here is arranged to fit its “singing.” His own tone is unmistakable, as is Leisz’s and Cantuaria’s. The guitars are as distinct as the oud and the violin, all of them carried into the next space by hand drums. While each song does stand on its own as a harmonic and lyrical entity, with adventurous improvisation added in the spirit of true exploration, as an album they are linked by the weave of aural tapestry, dynamics, and spaciousness that is so central to Frisell’s sound. And while this is more collaborative than perhaps anything he’s done in a decade, it nonetheless bears his sonic and esthetic imprint. This is a remarkable album; its sets a new watermark for Frisell’s sense of adventure and taste, and displays his perception of beauty in a pronounced, uncompromising, yet wholly accessible way. Thom Jurek

AMAZON.COM -EDITORIAL REVIEW
Bill Frisell took the Downtown New York jazz scene to Nashville, and Marc Ribot did the same thing for Cuba with his Los Cubanos Postizos and Muy Divertido. But until Frisell’s The Intercontinentals the robust, haunting sound of Malian blues guitar was largely untouched by six-stringing jazzoids. The aptly named Frisell ensemble here includes Brazilian guitar and vocal great Vinicius Cantuaria (playing solid drums half the time), Mali’s premier percussionist Sidiki Camara, Greek oud and bouzouki virtuoso Christos Govetas, pedal steel guitarist Greg Leisz, and violinist Jenny Scheinman. Rather than cover all the band’s continents, though, the focal point is largely singular: “Boubacar” (in honor of Malian guitar pioneer Boubacar Traore) opens the set and has its vibe continued with a cover of his “Baba Drame,” and everywhere the notes are hit and moods invoked as if Ali Farka Toure were looking on from Timbuktu. This is, though, still Frisell. An American earthiness crops up in Leisz’s steel, as does the Mediterranean in Govetas’s oud. And Frisell’s sampled loops create an atmospheric cloudiness grounded by Camara’s calabash and djembe and Cantuaria’s drumming. In the constant sonic middle ground are the trifecta of oud, violin, and bass, merging the melody and rhythm brilliantly. Rootsy and undeniable, The Intercontinentals is yet another Frisellian work of genius. Andrew Bartlett

BARNES & NOBLE-REVIEW
Bill Frisell may have originally made his name in jazz circles, but his range has broadened considerably over the past decade — his latest project, The Intercontinentals, certainly has only a tangential connection to conventional jazz. Although it incorporates improvisation at times, this flagrantly eclectic band traffics in world music fusion. And a beautiful job these fellow travelers do of it. Frisell is an old hand at mixing disparate sounds; here he brings together open-minded practitioners of Brazilian, African, Greek, and American country music, along with his own, now unclassifiable playing, to produce a magically alluring hybrid genre. The band — Christos Govetas, Vinicius Cantuária, and Sidiki Camera — along with guests violinist Jenny Scheinman and pedal steel guitarist Greg Leisz, are able to mesh while asserting their core musical identities, the very key to successful fusion. Along with fellow guitarist Ry Cooder, Frisell is now the leading exponent of the imaginative cross-cultural music blend. Viewed as a collective project rather than as a vehicle for his guitar playing, The Intercontinentals may be his masterpiece. Steve Futterman

DOWNBEAT-REVIEW
Bill Frisell gathered musicians from Brazil, Mali, Greek Macedonia and the United States to create this international band of neo-gypsies. The resulting sound is a truly collaborative effort, a nexus of world-beat styles and American roots music.
The combined timbres of a studio full of stringed instruments (various plucked and strummed guitars, wavy lap and pedal steels, ancestral oud and sustained violin), human voices (Portuguese, Malian and wordless) and delicate percussion create a curious texture that leaves lots of room for fresh improvisational and compositional ideas.
Beautifully recorded and produced by Lee Townsend, all the tracks on The Intercontinentals meld together nicely into a whole. Between-tune segues – which often utilize electronic loops – contribute to the flow.
The pulse is ever-present as Sidiki Camara’s steady shakers maintain the groove with exquisite minimalism.”

L.A. TIMES-REVIEW
Attention, diplomats: Global unity is possible
Guitarist Frisell has so many musical personas that one shouldn’t be surprised at anything he does. But the Intercontinentals manages to reach beyond even his eclecticism. For starters, the personnel consists of Brazilian composer-singer-guitarist Vinicius Cantuaria; Greek-Macedonian oud and bouzouki player Christos Govetas; percussionist Sidiki Camara from Mali; with violinist Jenny Scheinman and pedal steel guitarist Greg Leisz. That’s about as diverse a lineup as any musical globalist could wish for, and it’s not surprising the group’s efforts are virtually indefinable, sometimes surfacing with a floating, African feeling, sometimes recalling down-home American country music, at other times — especially in the vocal numbers with Cantuaria and Govetas — finding the compatible vibrations between Africa and the New World. But nothing is predictable, and the great beauty of this album is the consistent surprises it offers.