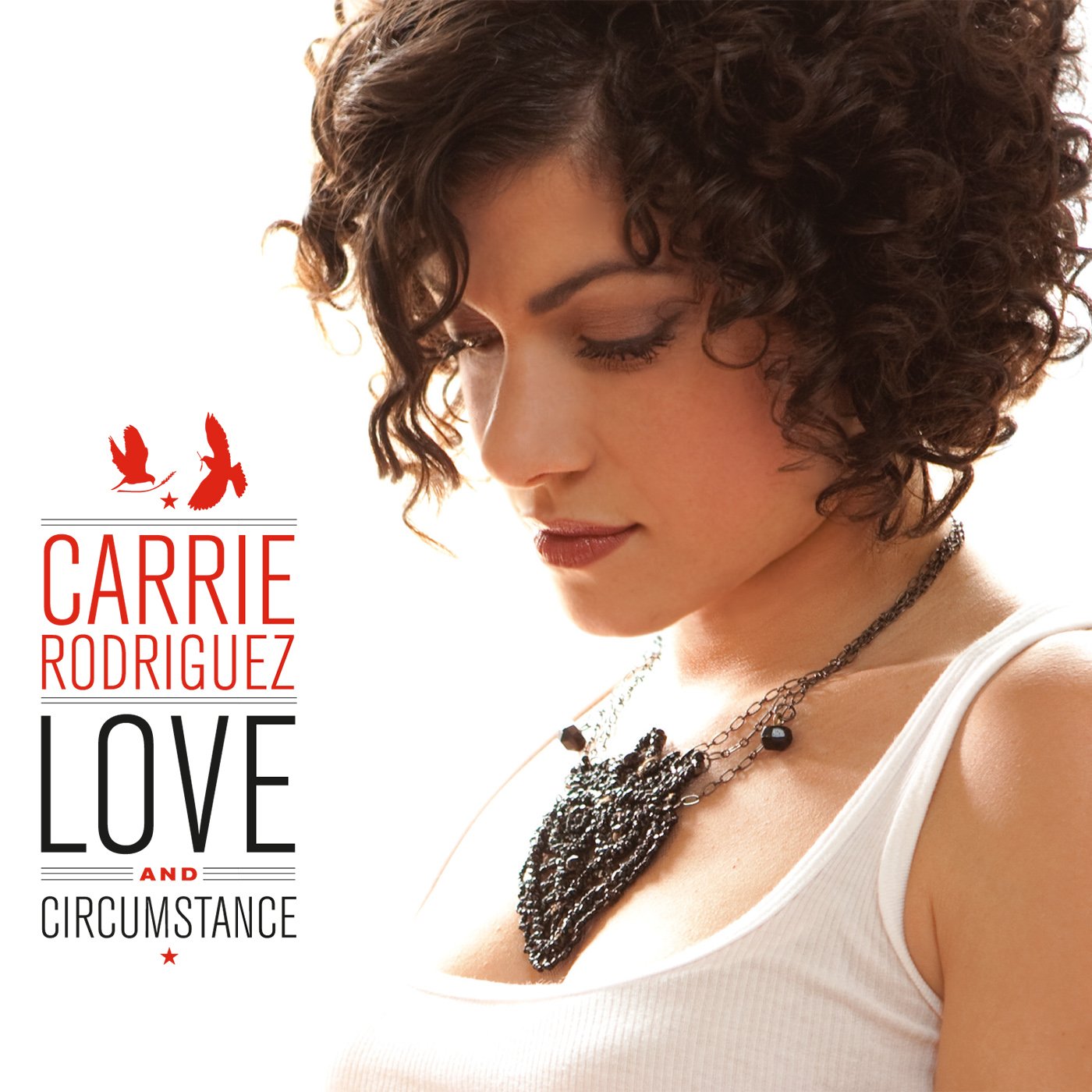 3. When I Heard Gypsy Davy Sing
(written by David Rodriguez)

4. Eyes On The Prize
(written by Matthew S. Ward)

7. I’m Not For Love
(written by Sandrine Daniels)

8. I Made A Lover’s Prayer
(written by David Rawlings & Gillian Welch)

11. I’m So Lonesome I Could Cry
(written by Hank Williams)

“Carrie Rodriguez proves herself an astute interpreter of other people’s material via her latest – and best album to date.”    – Lee Zimmerman/BLURT (April 21, 2010)

“…her latest absolutely floored me. It’s a dozen covers so skillfully done that some of the original artists might be tempted to enter the witness protection program.  If this isn’t her breakthrough album there’s no justice!”    – Phoenix Brown & Lars Vigo/Off-Center Views (May 1, 2010)

“Taken as a whole, the album is a slow burn reminiscent of Emmylou Harris’ Wrecking Ball…. the best showcase of Carrie Rodriguez’s talent to date.”    – Juli Thanki/Music & Musicians (May, 2010)

“Rodriguez has taken a handful of classic tracks from her genre and truly made them her own.     – Daniela Garcia/Venus Zine (May 3, 2010)

“Those who have been following Carrie Rodriguez throughout her career will find Love & Circumstance an exciting addition to her oeuvre, new fans will get a glimpse of the rising star’s influences; both will revel in the sterling musicianship and heartfelt interpretations of new and classic songs. ””    – Barry, Birdland (May 03, 2010)

“Cover albums by artists known for writing their own material can be double-edged swords. It’s a tricky balance to put your own stamp on material that others have created without losing the original’s unique qualities. For every illuminating spotlight into their formative influences such as Bowie’s Pin Ups or Willie Nelson’s Stardust, there is an equally misguided dud like half of Bob Dylan’s Self Portrait. Singer/songwriter Rodriguez gets it right, though… Actually, if you didn’t check the liner notes, it might seem that M. Ward’s “Eyes on the Prize” or Richard Thompson’s “Waltzing’s for Dreamers” are Rodriguez-penned since their breezy, easy flowing melodies feel similar to her own. Rodriguez also interprets songs written by her family, in particular father David’s “When I Heard Gypsy Davy Sing,” and one from her great aunt, the only Spanish-language-sung track here, “La Punalada Trapera”….  That’s especially critical when Rodriguez attempts standards such as a stripped-down rendition of Hank Williams’ “I’m So Lonesome I Could Cry” and Merle Haggard’s “I Started Loving You Again.” …. The bigger, more layered approach on Lucinda Williams’ “Steal Your Love” and Little Village’ s obscure “Big Love” help make them centerpieces that both ground the disc and allow Rodriguez to show she’s as powerful on them as on the more sparse arrangements.  She rescues David Rawlings’ and Gillian Welch’s little-heard “I Made a Lover’s Prayer” and bolsters it with drums and dark strumming, even aggressive guitars highlighted by a stunning Frisell solo.  Love and Circumstance is beautifully conceived, passionately performed, and every bit the equal of the other two terrific releases in her solo catalog.” –  All Music Guide review by  Hal Horowitz

“Albums of cover songs are curious things. An artist can often reveal more in the choice and interpretation of someone else’s song than in an original composition — a fact that comes to light in brilliant effect with Love and Circumstance, the new album from Carrie Rodriguez.  Rodriquez has that rare ability to make her songs work completely, where the scope of instrumentation is equal to the lyrics and melody.  It is that special innate gift as well as her obvious love of a perfectly attuned and deeply personal song that makes the dozen covers on Love and Circumstance such a compelling and revelatory listen… Just one of many standout tracks is “Big Love”, a song originally written and recorded by the one-off Little Village (John Hiatt, Ry Cooder, Nick Lowe and Jim Keltner). We’re also smitten by the sumptuous version of Lucinda Williams’ modern roots classic “Steal Your Love”, a towering, transcendent anthem of goose bump-raising proportions.  Highly recommended.” – Direct Current

“I’ve really pretty much had it with covers records —  but even I have to admit that not all of them are created equal, and very, very few of them boast pedigrees as stellar as Carrie Rodriguez’s Love and Circumstance.  Rodriguez herself is no slouch, and I happen to think she actually excels when she’s interpreting others’ material — and here, she’s not only joined by an ace band that includes Bill Frisell and Greg Leisz, but she cherry-picks from some spectacular songbooks, including John Hiatt (the Little Village cut “Big Love”), Lucinda Williams (“Steal Your Love”), and Townes Van Zandt (“Rex’s Blues”).  The result is a collection that does a wonderful job of paying tribute to some of roots rock’s leading lights. The band is marvelous, as you’d expect, and Rodriguez’s vocals have the sweetness and fine texture of dark honey. In fact, she damn near makes these songs her own; if you aren’t familiar with the originals, you’d never suspect their disparate origins, and even if you loved these songs the first time around, you’ll be hard-pressed to deny that Rodriguez does right by them. Looking at the album artwork, you might be tempted to dismiss her as purely a pretty face, but don’t be fooled — the ever-so-slightly burred edges of her voice hint at a spiritual depth beyond her 32 years, and musically, Love and Circumstance has more to offer than your typical covers project. Just listen to the tangled knots of guitar that unspool in “Punalada Trapera,” and you’ll understand that this is a labor of love, not a lazy holding pattern between “real” albums.” – Jeff Giles, CD Review

Carrie Rodriguez doesn’t just cover the love songs in her fourth album, she inhabits them. The Austin, Texas, singer-songwriter grew up among musicians, studied violin at Berklee College of Music, plays fiddle, electric mandolin, and tenor guitar, and toured with Chip Taylor. That pedigree shows on Love and Circumstance, which has a big, polished sound rich in texture and instrumentation. Hans Holzen (guitar and mandolin) and Kyle Kegerreis (bass) are joined by guests Bill Frisell (guitar), Greg Leisz (lap steel), and Buddy Miller and Aoife O’Donovan (harmony vocals). Rodriguez’s voice is arresting whether she’s slowing down Lucinda Williams’s “Steal Your Love,” giving a fresh interpretation to Richard Thompson’s “Waltzing’s for Dreamers,” or belting it out on “Big Love” (Little Village). This is masterful musicianship, with primacy given to the guitars, which blend beautifully yet inhabit different spaces within the songs, so that the character of each—tremolo, acoustic, electric, tenor—shines. There are lovely touches on every cut, like the ecstatic single lines on “La Puñalda Trapera” that play up Rodriguez’s soulfulness or the way Frisell’s guitar dances jazzily around the single repeated notes chiming from Rodriguez’s mandolin on Hank Williams’s “I’m So Lonesome I Could Cry.” A stunner. (Ninth Street Opus)  –  Celine Keating, Acoustic Guitar