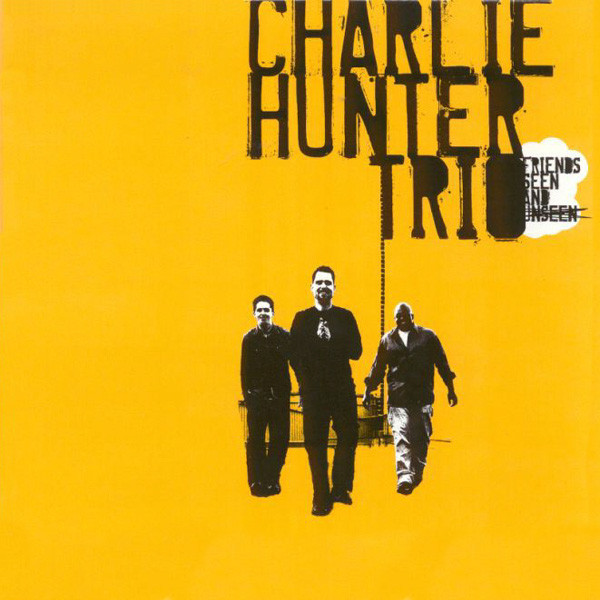 The Village Voice
By Francis Davis

“The Charlie Hunter Trio’s Friends Seen and Unseen is lean and slyly funky, with Hunter creating the illusion of a Hammond B3 here and there. The speed of Hunter’s chords gives drummer Derrek Phillips plenty of room to thrash around, and his New Orleans parade rhythms are especially bracing on the slinky “Lulu’s Crawl,” where tenorist John Ellis (who elsewhere occasionally switches to bass clarinet or flute) slap-tongues to telling effect, a fine companion to Hunter’s wah-wah. Not surprisingly for a guitarist who got his start behind Michael Franti in the Disposable Heroes of Hiphoprisy and made his first big splash with a Nirvana cover, Hunter takes advantage of echo and feedback and other rock devices. But not even the staunchest conservative could deny that he plays jazz. In its uninsistent way, Friends Seen and Unseen proves both that the tried-and-true still works and that a little updating never hurts.”

Hunter shows off his broad style, talent and taste on Friends Seen and Unseen”… The drum work of Derrek Phillips and saxophone of John Ellis along with the Hunter’s incredible guitar work, it is easy to see why Hunter has been heralded as the freshest thing to happen to jazz in years.”

”The new recording clearly stands on its own and proves that the maturing guitarist still has that special something that keeps the music fresh, vibrant, and enjoyable…. His ability to play parts that are sometimes rhythmically at odds with each other is more than remarkable. It is frightening. He has taken what was originally treated as a bit of a novelty and raised it to a level of art for which there is no real frame of reference. . . .
Hunter is said to have remarked, when he dropped the finished album to Ropeadope, that it is his best record yet. With his diverse discography these are strong words indeed, and while its position at the top of the heap may be subjective, it clearly stands in the upper reaches. Certainly it is an album by an artist who is growing in palpable leaps and bounds.”