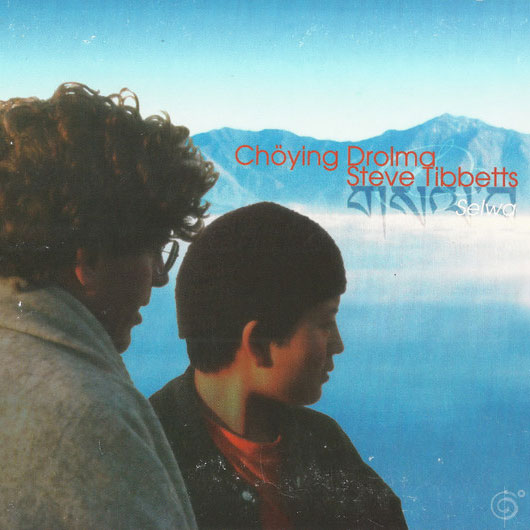 recorded in Boudha and St. Paul

“No one can accuse guitarist Steve Tibbetts of not following his bliss.
Selwa is as much a sonic pilgrimage as anything else, a serene and spiritual sequel to the 1997 recording “Cho,” which paired Tibbetts for the first time with the Tibetan Buddhist nun and vocalist Choying Drolma…

He doesn’t collaborate with her so much as commune, subtly deploying an array of acoustic and electric guitars to accent her prayers and homages…
there’s plenty of inventive guitar work just the same, slowly moving in and out of focus or needling its way through a weave of percussion. Meanwhile, on “Song of Realization,” Drolma transcends all: “I do not recognize this earth / It is an assembly hall adorned by flowers / I do not recognize me to be me / I am the supreme victor, the wish-fulfilling jewel.”

The Absolute Sound
By Derk Richardson

“Those holding preconceived notions about Tibetan chants – that they are too esoteric to enjoy as music or that their sacred qualities can only be compromised by too close an association with Western idioms and modern studio manipulation – are in for a not-so-rude awakening with Selwa, unless of course they are already primed for these radical sonic experiments by exposure to Drolma and Tibbetts’ 1997 debut Chö.

Tibbetts is a Minnesota guitarist who balances fiery, post-Hendrix licks and explosive percussion with mystical and surprisingly complementary atmospherics. Drolma is a Tibetan Buddhist nun who has founded a school offering broader education than previously available to women in her culture. Together, this seemingly odd couple builds a compelling case for a seamless continuity between ancient holy traditions and modern secular technology.

On eleven tracks, Tibbetts and frequent collaborator percussionist Marc Anderson subtly adorn the stirring, contemplative vocals they recorded in Boudhanath, Nepal. They use acoustic and electric guitars, cymbals, gongs, drums and multi tracking to highlight and shade the spirituality – the quest for awakening and freedom – explicit in the chants and embodied in Drolma’s radiant voice. Lee Townsend’s production puts a light, transparent gloss on spaciously arrayed sounds that move gracefully around the soundstage. The sonic result is a slow dance of crystalline elements through a diaphanous, faintly swirling mist. As aurally intriguing as the most finely wrought ambient soundscapes of Brian Eno or Robert Rich, Selwa yields the ineffable bonus of deeply moving and refreshingly ecumenical devotional content.”

While Chö was basically an artfully enhanced field recording, Selwa is a musical collaboration between two artists who have grown to understand each other. Both albums were made by recording Drolma’s voice in Nepal and then enhancing the tracks in Tibbett’s studio. But Drolma’s voice is now much more musical, with a rich melodious tone and vocal ornaments derived from both Indian and Tibetan music. On Chö, Drolma, and the nuns who accompanied her, played traditional Tibetan bells and drums to keep the beat. On Selwa, she sang to an unrecorded drone playing in her headphones. This gave Tibbetts much more freedom to add both chords and rhythms of his own, a freedom he uses sparsely and sensitively.

These are traditional chants in Tibetan and Sanskrit, many of which describe the complex visualizations in Vajrayana meditations. But Vajrayana practices are designed to transform powerful emotions, not suppress them, so each of these chants has a distinct emotional mood that Tibbetts specifically enhances….. Don’t think, however, that this is an album of remixes for the dance floor. The main elements are acoustic guitar, subtle atmospherics, and Marc Anderson’s hand percussion. Tibbetts adapts the music to the original chants, not the other way around, and there is no question that each of the tracks is a prayer first and a piece of music second.

“Selwa is a beautifully performed, richly produced disc that outdoes its predecessor, Cho. After its initial impact, this second collaboration between Tibetan Buddhist nun Choying Drolma and Minnesota guitarist Steve Tibbetts raises koan-tough mysteries about aesthetics and spirituality. In the lush, reverberating world the pair create, it’s hard to tell where one ends and the other begins.”

“Tibbetts and producer Lee Townsend employ a wide variety of fascinating treatments to the nun’s varied and distinctive vocals…. this artistic sleight of hand is performed so expertly by the collaborators that we never notice it.”

“It is through artifice–aesthetic choices–that spiritual heights are reached. Cathedrals and temples are made by the hands of men, not directly by the hand of God. If the beauty of jeweled Papal robes are God-given, then so is the beauty of Elvis’ rhinestone-encrusted jumpsuit. What we like about Tibbetts is that he makes good aesthetic choices, ones that allow jaded, middle-class Western listeners to place a small plastic disc in a machine and magically feel a deep connection to this fascinating woman on the other side of the world–and to something larger than ourselves. Tibbetts seldom gets between us and her voice by throwing us the cliché we expect. For example, each piece on Selwa is through-composed and constantly shifting, avoiding the rhythmic and chordal loops we expect, always keeping us in the moment. What we like best about Tibbetts is that he adds a teaspoon of sugar to Choying Drolma, but lets us think we’re taking her straight.”

“Choying Drolma herself clearly does not keep her head in the Himalayan clouds. An interview included in the CD booklet reveals a strong, no-nonsense character–a feminist and a realist. The best track on the CD, “Vakritunda”, sounds secular–sexy, even–as Drolma’s doubled voice snakes through an Indian-pop-influenced melody. There seems to be a characteristically Tibetan Buddhist openness at work in this song. The Dalai Lama has said that if science disproves something in scripture, then his religion will have to adapt. Choying Drolma has proved herself highly adaptable, not clinging to illusory traditions or forms but creating new illusions for a new audience, leading them toward the truth she wants to share. Maybe superior taste is morally superior.”

“In 1997 the contemplative, deeply moving collaboration between Tibetan Buddhist nun Chöying Drolma and guitarist / soundscape artist Steve Tibbets was a textbook example of how to bring together two cultures whose musical and spiritual traditions were so different. Tibbetts, long a maverick who had little regard for the way world music was presented in modern contexts, set about working with Drolma, whose traditional and devotional Tibetan chants were revered in Buddhist circles. He understood that for Drolma, singing her prayers was a bedrock foundation of her spiritual practice. He illustrated them by composing guitar and percussion soundscapes to fit the context of her prayers; not the other way around. Seven years later, the pair re-team for Selwa. Tibbetts takes more chances here sonically, but he remains committed to the source material, stretching his backdrops to give Drolma’s beautifully reedy voice flight… Ultimately, Selwa is in many ways a stronger album than its predecessor. The principals are more comfortable with one another; there is an obvious element of trust and a shared sense of adventure. These two albums should be the standard by which all other East-West collaborations should be judged.”

“Choying Drolma and Steve Tibbetts have created a piece of work that, on the surface, presents a melding of cultures caused by the Tibetan exile. However, the tracks flow in perfect sync with the west and present the east gloriously without pretension – now how is that for fusion?

The electronic soundscapes flow patiently over the folk voice of the gifted Tibetan nun who is absolutely stunning in this element… A soundscape which, were it not present here, would be worth traveling the world over.”

“Drolma and Tibbetts conjure magic on this disc, but most of the alchemy stems from the connection of two distinct personalities. You might in fact, call Drolma and Tibbetts musical pioneers….. Selwa has a strong unconscious undertow that is going to lead its listeners in a transformational direction.”

“With America’s continually growing interest in Eastern arts and philosophies, finding a natural synthesis can be challenging. Yet once in a while emerges such harmony there is no doubt something deeper than superficial, surface layer comparisons exist. Selwa is one of the most enjoyable to date. The follow-up to 1997’s Chö, Minnesota-based guitarist Steve Tibbets (a minimalist player by nature) again joins Tibetan Buddhist nun Chöying Drolma (a philosophical minimalist by nurture) and lays enchanting melodies beneath heartbreakingly beautiful vocals… Tibbetts water-like serenity plays perfect partner to Drolma’s quiet fire. (DB)”

“Selwa – translating as “luminous” or “awake” ? is an understatement.
So it goes throughout this record, an eerily intimate travel within Drolma’s devotional ritualism. Her minimalist poetics are matched by guitarist Steve Tibbetts, whose Steve Reich/Philip Glass/Brian Eno expressionism has garnered his ECM records high acclaim…. Drolma herself is no “performer” (as in “entertainer”): Selwa is the root of bhakti (devotion), her life real-time testament to the sound she produces. … Her focus is compassion; music is the beautiful by-product.”

“Let’s not forget the exquisite tinkering of her collaborator. Selwa is a heartbreakingly stunning record, credited equally to Tibbetts’ knowing fingertips. The light guitar flushes and electronic solitude woven into Drolma’s voice is bafflingly mythical. The album sounds of no place or time, and that’s not to call it “transcendent.” No, their work roots one deeply before uplifting occurs… “Song of Realization”, “Palden Rangjung and “Vakritunda” prove technology’s well-earned place within sacred music, as the soft digitialism induces the same transparencies as Drolma’s poetry. If two worlds have ever met without cliché, Selwa is the language they will speak.”