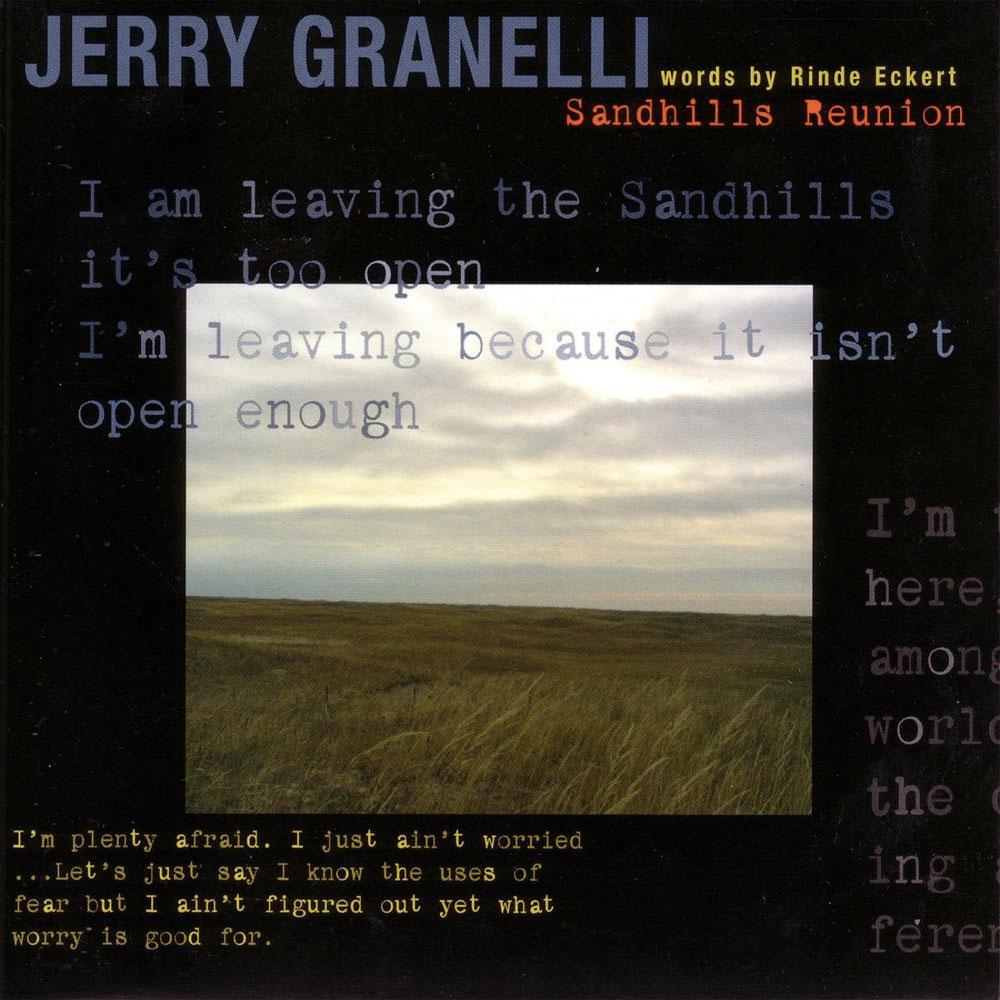 Producer Lee Townsend’s name on a record is usually a good sign. His work with guitarists – Charlie Hunter, Bill Frisell, and brilliant Will Bernard (whatever happened to him?) – has been of a consistently high standard and his helming of this ambitious music and spoken word project is spot on. There’s a beautiful clarity in the engineering, a sonic womb in which drums, guitars and voice are fluids that swirl amid an ever growing narrative heart-beat. The performance of Granelli, who played with original beats such as Ginsberg, Ferlinghetti and Rexroth back in the late-1950s, is exemplary. The kit is handled as if it’s a set of congas that weave into the ensemble rather than sitting at its base. This feeling of airiness, of suspension that the musicians summon decisively serves the dry, detached but vivid nature of playwright/singer/actor Rinde Eckert’s narration. It’s a deadpan bloodless timbre that cunningly counterpoints the subject matter of the text; legendary outlaw Billy the Kid and Sandhills region of north Nebraska, a monument of cowboy folklore. The tales Eckert tells have an endearingly human quality, a black humor that evokes Pat Garrett shooting a man in the middle of a joke, smiling and finishing the punch line and a windswept romanticism that is a voice ‘staggering around a bedroom like a blind burglar’. Music and spoken word projects require both substance in the text and a real precision in the arrangements to be successful and the Granelli-Eckert relationship is one of Waldron-Lacy telepathy. This project is starkly different from something like Mingus’ Scenes In The City yet it is connected insofar as it also presents a slice of life that, despite its attendant mythology, rings devilishly true.

Mingus brought jazz’s urban jungle to us in all its slicker-than-the-rest splendor. Granelli and Eckert conjure up the wild frontier with its mordant mortality and outrageous bravado. As Billy The Kid would say: ‘Even dead I’m gonna look 21 and pretty as hell.’ As haunting as it is haunted, as sublime as it is spooky. – Kevin Le Gendre, Jazzwise (UK)

Sandhills Reunion by drummer Jerry Granelli features the words and spoken voice of Rinde Eckert against a richly textured ensemble including clarinets (François Houle and Sanctuary’s Jeff Reilly) and cello. Granelli traces the project back to older collaborations with writers such as Allen Ginsberg and Anne Waldman, but Sandhills Reunion has a contemporary sound…. Eckert acts out his texts with a North-American nonchalance that conjures up open prairies and claustrophobic, trigger-happy cowboy bars. There’s something about a certain electric guitar sound that says “Wild West”, and Christian Kogel does all the right Cooderish, Frisellian things in a nicely judged soundscape produced by Lee Townsend.

On Sandhills Reunion, where the musicians compose underscores for Eckert’s narrative, the tension never slips. Listen to “Like a Ghost in the Grass”, or “20 Questions for an Outlaw” or “Last Light”, which all deal with the story of William Bonney, aka Billy the Kid, from different perspectives. Eckert’s words are thoughtful and multilayered. On “Your Voice” he lets rip with similes that Beefheart might appreciate: “Your voice is like a spade shoved into packed sand/ Like decals torn from a foot locker/ Your voice smoulders like Bibles in a burned church.” – Guardian (UK)

“Like Bruce Springsten with his Nebraska or author Annie Proux with her two volumes of Wyoming stories, Jerry Granelli’s Sandhills Reunion–where his band accompanies Rinde Eckert’s words–evokes the American experience in the prairie heartland, placing poetic vignettes of small experience under a powerful microscope on a set of of jazz-backed prose poems that explore Billy the Kid, a bygone strip joint, a kiss blown at a wedding from the violinist to a small boy in a “Little White Suit,” and roughneck workers constructing a bridge over a “River of Glass,” dangling “like a grey spider” on the end of a taunt rope to inspect the rivets and bolts.

The music, composed variously by members of the band, swells with swirling reeds–clarinet, bass clarinet, bari sax, cello/bass/guitar, and Granelli’s drums. It blows moody and cool around Eckert’s words like a prairie fog; or chugs into a reedy bump and grind on “Just Angels,” a tale that takes us into a bygone “Godforsaken den of inequity.”

Sandhills Reunion is unlike anything I’ve heard, but the mood it draws–going back more than thirty years–is the same as that of Bob Dylan’s ‘John Wesley Harding’ or the Band’s ‘The Band’: odd, folksy, sometimes surreal tales, very American in nature, told with a simple eloquence entwined with superb yet understated musicianship. An odd, poignant masterpiece.” – Dan McClenaghan, AAJ

“While humor and wit comprise a portion of these works, the poet communicates a dappled view of humanity… this undeniably attractive outing moves forward with a cinematic flair. It¹s easily one of the more refreshing and insightful jazz-tinged efforts of 2005.” – Glenn Astarita, AAJ

“In these days of rap-informed everything, the combination of spoken word and jazz is nothing new. But rap has a certain cadence that differs from the less direct rhythms associated with the spoken word of, say, the beat poets of the ’50s and ’60s.

Drummer Jerry Granelli has been around long enough to remember those times and, in fact, collaborated in the ’70s with writers including Allan Ginsberg and William Burroughs. With “Sandhills Reunion” Granelli and a new ensemble of past musical collaborators mix a variety of musical approaches with the reflections, imaginings and internal dialogues of actor/playwright/singer Rinde Eckert. The recording highlights the strengths of both, but is best experienced by taking in everything as a whole.

Much as films like “Koyanisqaatsi” have created new ways of experiencing music and the visual medium, “Sandhills Reunion” aims to find a new confluence of music and the spoken word. Eckert’s musings take the form of personal experience (‘Our Particular Tragedy’), reflection (‘Your Voice’), intriguing narrative (‘Nolan’), and even a Q&A with Billy the Kid on the day of his hanging (‘Twenty Questions for an Outlaw’). At times allegorical and enigmatic, at other times crystal clear, Eckert’s writing is captivating, loosely tied together through the Sandhills of Nebraska and the character of Billy the Kid.

Granelli solicits music from each member of the septet, and the result is a diversity of styles that includes the ambient/new music sensibility of ‘River of Glass,’ the Middle Eastern inflections of ‘Our Particular Tragedy,’ the light funk of ‘Your Voice,’ the raunchy blues of ‘Just Angels,’ the Americana of ‘Last Light,’ and the unabashed folk of ‘Spun Like a Spur.’…. When combined with Eckert’s poetry, the result is a unified work that takes the listener on a vivid journey down a number of paths that, in the end, ultimately seem to converge at the same place.

Eckert’s readings are for the most part very matter-of-fact, with little in the way of drama or hyperbole, leaving it to Granelli’s ensemble to inject the emotional context. Granelli is the director of what is almost an audio film in its vivid visual evocation, but he receives a lot of support. Clarinetist François Houle, bass clarinetist Jeff Reilly, baritone saxophonist David Mott, cellist Christoph Both, guitarist Christian Kögel, and bassist J. Anthony Granelli come together in various combinations to create a soundtrack, an aural travelogue that takes Eckert’s writing and orchestrates it into an even broader context.

“Sandhills Reunion” works because both musical and poetic elements are strong unto themselves, and when placed together they successfully elevate each other beyond their respective boundaries.” -John Kelman, AAJ

The hip-hop culture has had much success combining poetry and music ….
but in this effort led by Jerry Granelli we get a completely different feeling from what the rappers get.

This poetry feels freer, rhythmically speaking…. the words are haunted observations that begin in the wide open, treeless flatlands of northwestern Nebraska called the Sandhills.

Poet and performance artist Rinde Eckert wrote the words and presents them here, his laconic voice as featureless as the landscapes shown in photographs he shot in the Sandhills, which are published in the liner notes along with all his words.

Are these empty places forgotten geography where nothing has happened, or are they an abundance of opportunities with plenty of room for something to happen? Eckert fills this space with his thoughts of men convinced life is happening somewhere else. But they are here, and they are alive, and they are determined to create life of their own. Or die trying.

Granelli’s musicians are equally determined. Their sounds are filled with abstract ruminations that feel cohesive yet remain elusive. Like one of those feelings where you know what it means – until you try to describe it.
Grade: A
– Chuck Graham, Tucson Citizen

“With music by Granelli and the rest of the band and words by singer/actor/playwright Rinde Eckert, this journey (and that is exactly what it is) takes the listener through a linked sequence of internal monologues. The words are gorgeous little stories about a man on the prairie and in the Sandhills.

This album really needs to be listened to carefully and in sequence. It isn’t necessarily a full story, but the tracks flow so well together that it is impossible to skip or reroute a cut. The first track on the album is a pretty simple spoken word and drum piece and the rest of the album follows that prairie, country, dustbowl feel, with the exception of the second track, “Our Particular Tragedy”. It (along with maybe “Nolan”) is the only tune that really has that 1950’s Beat poet feel, with David Mott’s baritone sax walking through on its way to the coffee shop.

Track three, “20 Questions for an Outlaw” is a “historically accurate dialogue” using the persona of Billy the Kid. It is a question and answer style narrative that weaves a great story line about the soul of Billy and tells an absolutely amazing story. “Nolan”, possibly the best and most wrenching track on the album, features Eckert telling the story of Nolan, a sheriff. Granelli’s cadence drumming in the piece works perfectly against Christoph Both’s languorously beautiful cello lines…. the voices in the back haunt the touching story of Nolan.

The really interesting thing about this album is that it’s a sort of Nebraska version of Beat poetry. It has cowboy imagery with all the trappings of a Beat reading. Granelli and the band really shine behind Eckert’s words, leaving perfect space for story. And as much as this is a Granelli album, Rinde Eckert really steals the show on this record. His stories are some of the most vivid and amazing tales put to record recently.” – by Ryan McDermott, One Final Note