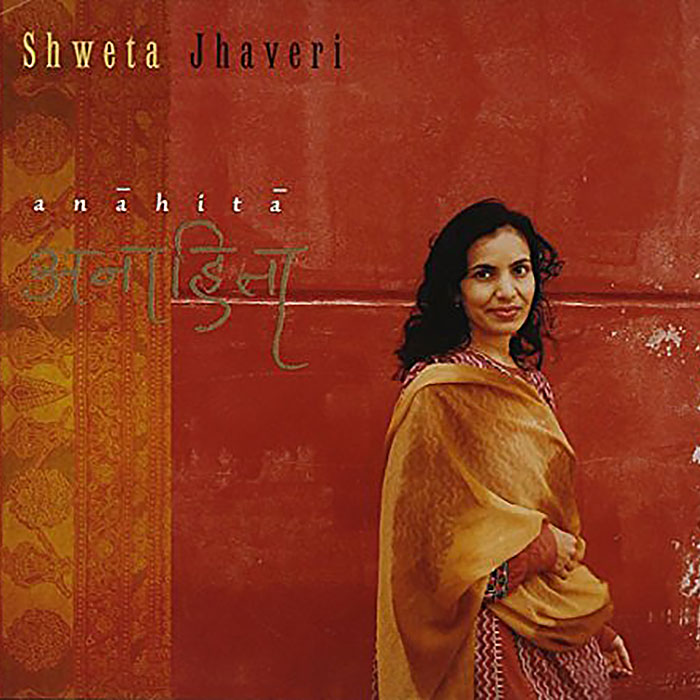 All compositions by Shweta Jhaveri

“To say that Anahita is an inspired update on the theme of East meets West – with Shweta Jhaveri singing age-old North Indian-style raga songs in a contemporary setting of guitar, violin, bass, and drums – would be to damn with faint praise. Beyond beautiful, this is creative music-making of the highest order, not so much crossing musical and cultural borders as blurring them altogether. Jhaveri is a world-class talent, and the deep, subtle sympathy among the vocalist and violinist Jenny Scheinman, guitarist Will Bernard, bassist Bill Douglass, and drummer Jim Kassis blesses every poetic, impeccably produced note here. From the sanguine dreaminess of the opening “Invocation” to the more desolate drones of finale “A Nost Dawn,” Jhaveri’s otherworldly voice weaves a serpentine line through the quartet’s decidedly earthy soundscape – and the contrasts complement each other to the utmost. The thoughtful design adds to the album’s allure.
-Billboard

“An Indian-jazz fusion project, it sounds not at all like a blend but as if the two worlds are one. Recorded in San Francisco with a quartet of jazz-drenched Bay Area musicians sympathetic to her vision, Anahita was produced by Berkeley’s Lee Townsend (who does the same for such unique talents as Bill Frisell and Charlie Hunter). Jhaveri composed a series of extended songs in the North Indian classical raga form, accompanying her haunting singing with the droning tamboura and autoharp. But it is the interweaving of her voice with the band’s playing that makes this album such a standout; violinist Jenny Scheinman, electric guitarist Will Bernard, bassist Bill Douglass, and drummer Jim Kassis deftly and subtly create their own instrumental style that draws from Eastern and Western traditions. The playing is often so subtle and delicate that it seems more like a wispy fog. The group takes its cues from Jhaveri’s astounding voice, and the result is a listening experience of haunting lyricism.”
-The Express

“Very, very occasionally, a voice of such outstanding quality comes along, it demands immediate attention. When that voice also delivers a richness of ideas, then the temptation to go into hyperbolic overdrive is maddening. Let’s take six deep breaths and say only that Shweta Jhaveri’s voice is very, very special indeed. Here is the sort of music that feels as natural as breathing in and out, heady like a bit of extra oxygen in the bloodstream. When the listener feels as if particular pieces of music have always been in their life, that is a very good sign.”
-Folk Roots

“The Indian singer Shweta Jhaveri’s voice is so beautiful, that pleasant shudders run down one’s spine. But that’s not enough to her. She wants to break out of the ivory tower of Indian classical music, without betraying it’s soul. She transforms old compositional forms and melodic improvisations in the discrete and flexible line-up of electric guitar, bass and percussion. At the same time she allows herself a violinist and named her new album after the goddess Anahita, which holds out a promise of happiness. And listen: the essence of raga remains as well as the mystical mood. Why aren’t all experiments that successful!”
-Jazzthetik